For the past two years, there has been a campaign to legalize medical marijuana in Florida. A proposed constitutional amendment that would have legalized it nearly passed in 2014, when 58 percent of voters supported the amendment, just two points shy of the 60 percent threshold.

It was a devastating loss, but it didn’t dissuade United for Care, the group behind the push. Last January, the group submitted a new version of the constitutional amendment and spent the past year gathering more than a million signatures to get the measure on the ballot this November. Nearly a million signatures have now been collected and sent to the Supervisors of Elections for verification.

Yesterday afternoon, Ben Pollara, the group’s campaign manager, announced that 637,326 petition signatures have already been verified. That means only 45,823 petitions are left. Assuming 683,149 can bamedment2-medical-mariuanae verified, the amendment will appear on the ballot. Pollara expects confirmation very soon.

In a mass email to supporters, Pollara wrote, “I am confident we have turned in enough petitions to make the ballot by the deadline next week,” though he still asked for donations so that United for Care could fund an advertising campaign.

“The big news is actually getting on the ballot, which will come any day now,” Pollara says. He thinks that once ballots are printed, the measure will appear as the second item in the section for proposed constitutional amendments — meaning that their message will be the same; they can again implore votersto vote “yes on Amendment 2.” Pollara says the numbering isn’t that important, but “it’s nice that we won’t need to make new graphics.”

In 2014, Pollara says, the opposition to medical marijuana was much stronger. He remembers the language of the amendment was challenged with hundreds of pages of briefs and oral arguments. It still was approved for the ballot, though, in a contentious 4-3 Florida Supreme Court vote.

“This time, I think some opponents realized our language is constitutional. It already passed once,” Pollara says. “And certain things that they had taken issues with, we made small modifications.”

The new language would require doctors to certify that patients are suffering from a debilitating illness before prescribing marijuana. The state would issue ID cards. Patients could not grow marijuana in their homes but would have to frequent treatment centers licensed to grow and sell medical marijuana. This year, the amendment language was approved by the state Supreme Court 7-0.

The deadline to verify the petition signatures was February 1.

While Pollara is optimistic about the amendment becoming law in November, he says the biggest hurdle in passing medical marijuana in Florida has always been the 60 percent threshold. He blames low voter turnout for the loss in 2014 but thinks 2016 will be different.

“It’s an election year, and attitudes on this are changing,” he says. “We had 58 percent last time when we had low voter turnout and a huge opposition campaign. This time, I’m pretty sure we’ll get 60.”

Once medical marijuana is officially on the ballot, Pollara says they’ll start rolling out endorsements and paid advertising. He’s confident that the second time’s the charm. 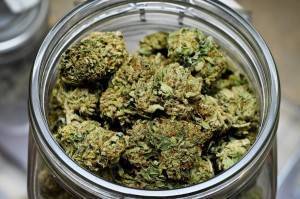